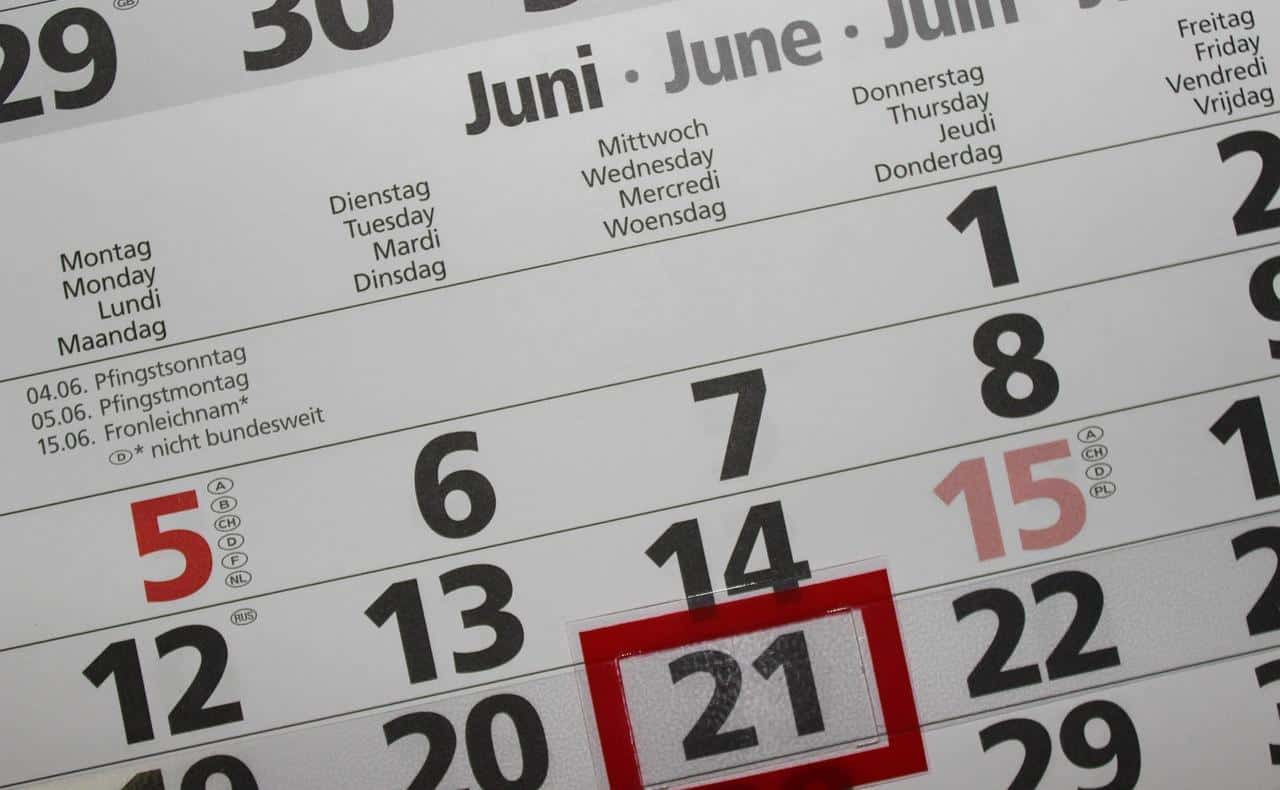 Knowing how to say and write down dates in German is essential for making appointments in the future and telling stories about the past. German has different ways of writing and speaking the date.

Dates are formatted the same as the British English way, but different to the American English way, namely: day, month, year.

Talking About the Date in German

To talk about dates in German, we need to know how to say a few different parts: the date, the day of the week, the month and the year. Let’s jump right in:

In order to talk about dates in German, the first task is to learn the German ordinal numbers. You may already know some of the German numbers, and if you can already count up to 31, then you’ve got a great head start.

The German ordinal numbers are simply the German way of saying ‘first, second, third, fourth’ etc. so that we can say ‘it’s the 7th of February’. Any readers in the US, I appreciate this is an British English way of giving dates, but German and British English follow the same format.

In English we usually do this by adding -st, -nd, -rd or -th to the cardinal numbers (four becomes fourth etc.) (with the exceptions being one, two and three).

In German we do the same sort of thing, except we add -e, -te or -ste to the end of each number. Just like in English there are a couple of exceptions, namely eins = erste (one = first) and drei = dritte (three = third).

Here are all the cardinal numbers from 1 – 31, with audio so you can hear and practice getting your mouth around some of these tongue twisters:

Next up we have months, which fortunately are very similar to English. You’ll see them in action later on in this post, but if you don’t know them you can read my post about the months in German first.

When it comes to talking about years, those numbers are going to come in useful again. If we’re talking about a year pre-2000 we have to use the following format (using 1994 as an example):

Like in English, post 2010 there are 2 ways you can say the year in German. 2023 can be said as ‘twenty twenty three’ or ‘two thousand twenty three’. The same applies in German.

Hopefully that’s not too complicated. Let’s finish with a few random years so you can really get a feel for these long numbers:

Next up, we need to be prepared in case someone asks you what the date is in German, or if you need to ask:

How to Say Dates in German: Putting it All Together

So now you know all the elements needed to say the date in German, so let’s put them all together. Like I said at the beginning of this post, the date format goes: day, month, year. We don’t always include every element of the date depending on the situation. As seen in the previous section, someone might just ask what day it is.

One thing to remember is that date are always masculine, so we need to use der.

In the last example the masculine der changed to den, because it has changed to the accusative case. This follows the usual German case rules.

Of course, we don’t have to only talk about todays date. If we are talking doing something on a particular date, we need to use the preposition an (on) plus the masculine article. Because the preposition an demands the dative case, der becomes dem so we have an dem… this is then shortened to am. You can read more about German prepositions here.

Writing dates in German is pretty straightforward. Like I mentioned for my American readers, it’s important to use the day month year format. Germans also don’t use a slash in date formats, preferring to use a full stop: 01.12.2022 = 1er Dezember 2022.

If you’re writing the date, maybe online or on a messenger, and just want to say something like ‘on the 17th March’, you can just write 17. with the full stop after the number, so you would get something like am 17.3 or am 17. März. There’s no need to write am 17er März.