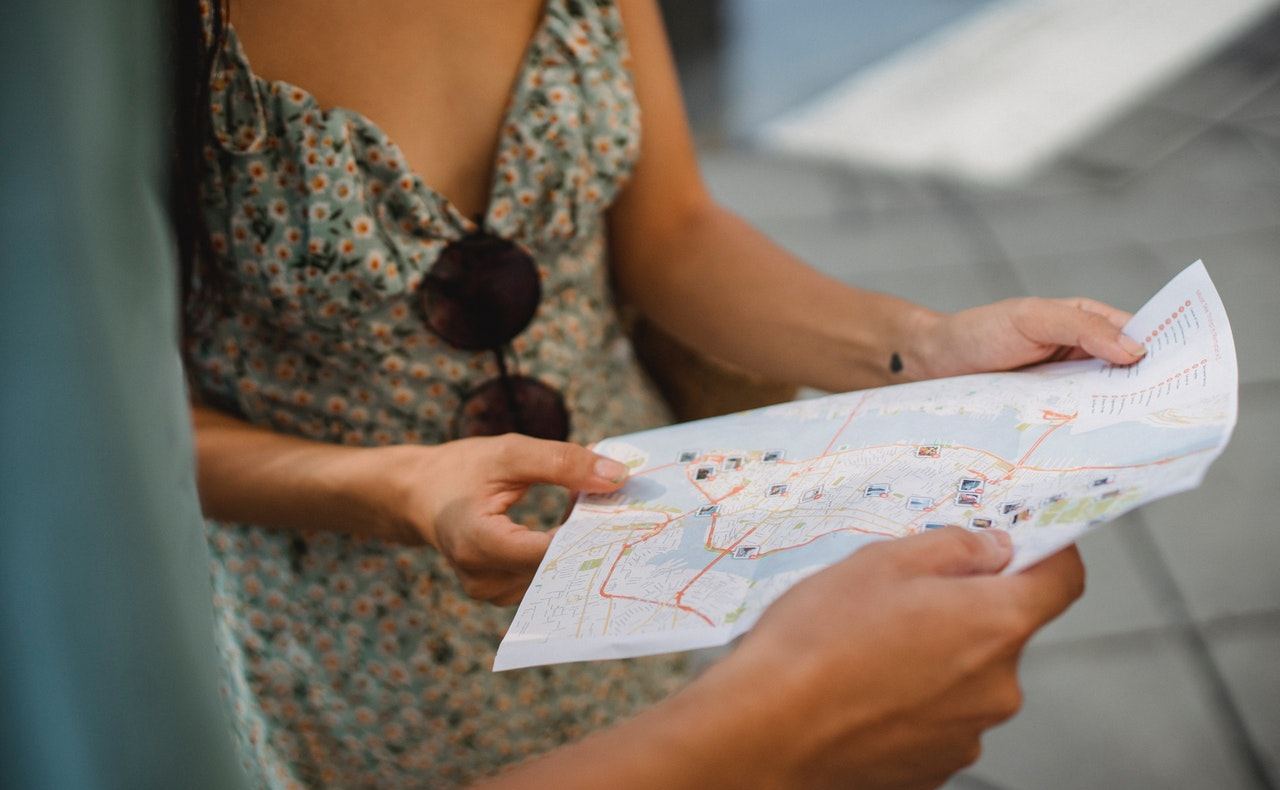 In this post we are going to take a look at the German prepositions and how to use them correctly. First of all, to get a feel for what prepositions are and how essential they are, let’s look at an example in English.

Imagine that someone has asked you for directions to your favourite café. Miraculously neither of you have access to Google Maps, so you’re going to have to go old school and describe it:

Firstly go along this road until you get to the library. Then go across the street and you’ll see the café opposite the bookshop.

You can see how essential the highlighted prepositions are in order to make these directions clear. Without them, many important details would be missed out.

What are German Prepositions?

Prepositions are everywhere in both English and German. They are words such as ‘along’, ‘opposite’, ‘over’, ‘at’ and ‘to’. Generally they appear before a noun or pronoun and help us to make sense of how things are related in a sentence.

In German there are many prepositions which are used to describe time, place and direction. While some of these prepositions can be translated directly, many of them cannot, and can have multiple meanings in English.

Prepositions and the German Cases

In English, the preposition has no effect on the pronoun or the noun’s definite or indefinite article that appear before it. You just put the appropriate preposition in first, then add the noun or pronoun, with no changes.

In the last example, it doesn’t matter if the café is ‘around the corner’, ‘over the bridge’ or ‘after the bus stop’, we use the definite article ‘the’ regardless.

The reason I’m telling you all this is because in German, whether you use ‘around’, ‘over’ or ‘after’ does affect the article that follows it. German makes using prepositions a bit harder because of the German case system.

Prepositions can affect which case is used for the noun or pronoun it appears in front of. Each of the prepositions can demand that the noun it precedes changes to either accusative, dative or genitive.

Since we are dealing with German cases, here is a handy, quick reference chart of the definite articles so that you can grab the correct definite article as we go through some examples:

Let’s get to know the German prepositions in turn, sorted by which case they demand.

Let’s start off with some simple prepositions to warm up. There are just 6 accusative prepositions and they mostly have straightforward translations. They are very common in German so you will encounter them a lot.

Whenever you use any of these prepositions, you will need to use the accusative case for the noun or pronoun that follows it. Let’s take a look at an example:

The beginning of this sentence starts as usual, and then we use durch (through). We need to work through a 3 step process to make sure this sentence is correct from now on:

Next up are the 9 dative prepositions. These are also very common in German, but are harder to translate. As you can see from the table below, many of them have multiple meanings. This is just one of those things that you will get a feel for the more German you learn and use.

Whenever you encounter any of these prepositions, you need to use the dative case for the noun or pronoun that follows it. It’s time for another example:

In this example, the dative preposition nach appears at the beginning of the sentence. The noun which follows it is der Winter (the winter). So using our 3 step process let’s work this out:

What if there are 2 prepositions in a sentence?

Well I’m glad you asked! This happens a lot in longer sentences so you need to be ready to spot those prepositions and identify which case they demand. Here’s an example:

In this example we use the possessive pronoun mein, which behaves in the same way as the definite articles we have seen so far.

As you have learned, each of these affect the noun which follows:

Prepositions which demand the genitive case are less common, but it’s worth getting to know them anyway. They have simple translations and there are some useful connecting words such as anstatt (instead of), trotz (despite) and wegen (because of).

You’re getting the hang of this now? Great! Now just because this is German, and you thought you were home free with this prepositions thing, I have to throw a spanner in the works (sorry!)

There are a group of German prepositions known as ‘two-way prepositions’ which can demand either the accusative OR the dative case depending on the situation. Now I totally understand if you want to throw your [laptop / smartphone / tablet] (delete as appropriate) out of the nearest window but stick with me!

First let’s take a look at these pesky two-way prepositions:

Now in order to decide whether to use the accusative or dative case with this group, we can use 2 simple rules:

Rule 1: We use the accusative case to express movement (I put the cup on the table)

Rule 2: We use the dative case to talk about the static position of something (The cup is on the table)

Now that’s not so bad. Let’s look at a few examples:

For two-way prepositions we need to give ourselves 5 prompts / questions as we build the sentence:

If you’ve made it this far, gut gemacht! (well done!) You can now level up your German by taking this next step to sound more like a native. German, like English, is very fond of contractions (shortening of words).

When you use prepositions, some of them can be combined with the definite article (usually der, das and dem) to go from two separate words to one. Let me show you what I mean:

In a previous example we saw this sentence:

Now there is nothing wrong with saying this phrase, but German speakers would usually contract the in and dem into one word, im. Can you see that we have taken the beginning of in and the end of dem and stuck them together?

These contractions are very common in German. It isn’t possible to contract every combination of definite article and preposition. Here are the most common contractions:

Here are some more examples:

Now let’s talk about pronouns (me, you, him, her). Just like nouns, pronouns are also affected by the prepositions which come before them. I’ve created another handy reference table so you can quickly refer to the cases and pronouns:

Now let’s look at some examples:

Give yourself a huge pat on the back / high five / slab of chocolate! You’ve successfully made your way through the maze of German prepositions. In this post you’ve learned that German prepositions can demand that the noun or pronoun that comes after it uses either the accusative, dative or genitive case.

You’ve discovered that some two-way prepositions can demand the accusative case for movement or the dative case for position. You’ve even learned about contractions and how in + das becomes ins, or bei + dem becomes beim.