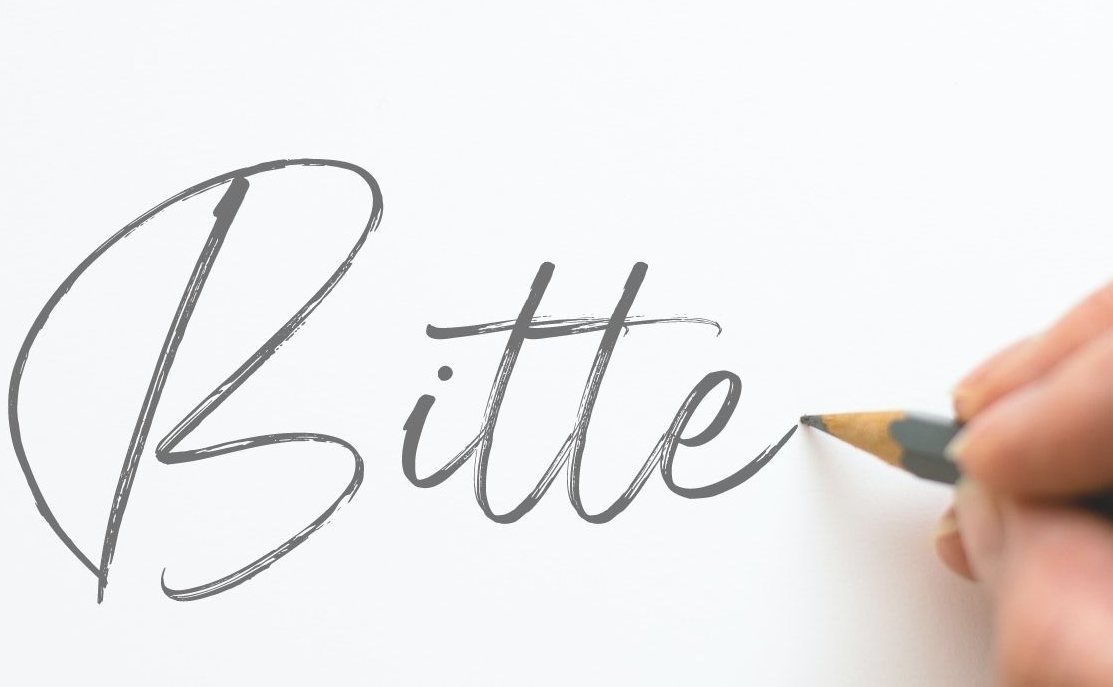 The German word bitte probably the most versatile word in German. In this post you’ll learn all the different meanings of bitte, and in which situations they apply.

Before we get started, let’s discover how this sweet little word actually sounds:

Easily the most common meaning of bitte. German speakers are known for their politeness (höflichkeit) so you will hear this a lot, and hopefully you will use it at lot yourself when you visit a German speaking country.

When bitte means ‘please’, generally it appears either at the end of the sentence or in position 3 after the verb or subject:

May I help you?

Sometimes you’ll sit down in a café or restaurant, and hear from the waiter or waitress: bitte schön? This is a short way to say ‘can I help you?’ in German.

Next up: Bitte can mean ‘here you go’ in the context of handing something over. You will hear this a lot when you speak with customer facing staff, such as waiters and waitresses.

Just remember it as a chunk and listen out for it next time you visit a café or restaurant.

Closely related to the previous meaning for bitte, is ‘you’re welcome’. Let’s use the previous scenario again:

German speakers like to adjust this phrase to match what you say to them. So if you were to say: danke schön (thank you kindly), your waiter/ess would respond with: bitte schön.

If you said: danke sehr (thank you very much), their response would be: bitte sehr. Look out for this next time you visit a German speaking country.

So far you have learned that bitte can mean ‘please’, ‘may I help you?’, ‘there you go’ and ‘you’re welcome’. Because of this you may encounter a lot of uses of bitte in one conversation, so we end up with a crazy exchange like this:

The next meaning of the word bitte is ‘pardon?’ or ‘excuse me?’ It is said with an upper inflection at the end because it is a question.

It is used when someone doesn’t hear or understand something that another person has said:

You can also say wie bitte? which means the same thing, but it often shortened to a simple bitte?

Go ahead / After you

Yet another meaning for bitte is ‘go ahead’ in the context of letting someone go through a door or to speak first etc.

For example if you are speaking to your language partner, and you both go to say something at the same time, one of you can say bitte, as in ‘go ahead, you go first’.

You can also think of it as ‘after you’ in the context of letting someone go ahead of you, or holding a door open for someone.

In German we also have the verb bitten which means ‘to request’, ‘to plead’ or ‘to ask’. This is conjugated in the usual way and used with the first person accusative (dich, euch or Sie). It can be used to express more emotion or even desperation than a simple ‘can you?’

Here are some examples:

So now you know 7 different meanings for the word bitte. Since there are so many possible meanings, be sure to listen out for it used in different contexts. Check for different tones or inflections to see if you can detect whether it is being used as a question, statement or just general politeness.

The most common use for the word bitte is ‘please’, so next let’s learn how to say ‘thank you’ in German.