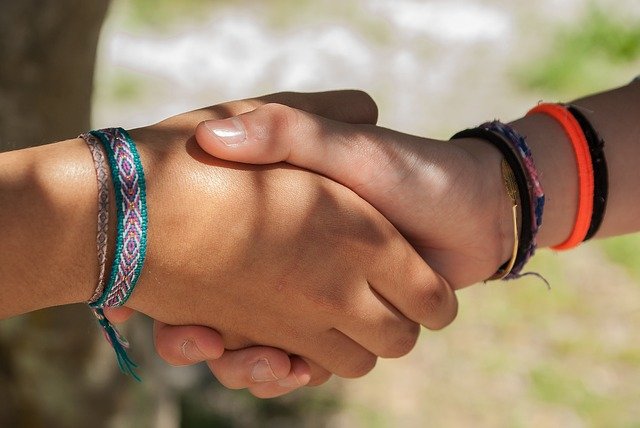 In this post you will learn how to say ‘nice to meet you’ in German?

Maybe you have just arranged a call with a new language exchange partner, Sprachpartner, meeting some new people in a café, or new colleagues at work.

One of the best things about learning German for me, is meeting new people and getting to know them. I’ve used these phrases countless times, in fact every time I meet a new language partner.

There are a number of different ways to say this commonly used phrase in German. How you say it depends on whether you need to use the formal or informal form.

Top Tip: As a general rule, if you are speaking to anyone you consider a friend, family or anyone the same age or younger than you, you can use the familiar, du, form.

For anyone else (shop workers, waiters, work colleagues, people older than you) stick with the formal, Sie, form.

I’ve used the formal, Sie, form as a default because you’re more likely to use it when meeting people you don’t know, but I’ve also included the informal form too. With all that said, let’s get started, auf geht’s!

Nice to Meet You in German

Meaning: It is nice to meet you (formal)

This is the closest translation to ‘it’s nice to meet you’ in German. Broken down, the phrase translates as es ist schön (it is nice), Sie kennenzulernen (to learn to know you).

If you want to use it on someone your own age, or someone younger, you can change to the informal version by changing Sie to dich.

We can shorten this phrase by leaving off the beginning, like we would in English:

Meaning: It pleases me to meet you (formal)

This phrase, translated literally means es freut mich (it pleases me), Sie kennen zu lernen (to learn to know you). It’s best to learn this formal version as a chunk, as you’re most likely to use it or hear it.

It can be also be said using the informal form, you’re more likely to use this with people your own age or younger.

This is a very similar to the previous phrase, and means the same thing. However this time we are changing the subject es (it) to ich (I). So instead of ‘it pleases me’ we are saying ‘I am pleased’.

For this reason the verb freuen (to please) is conjugated differently: es freut mich changes to ich freue mich.

Here is the informal form:

Meaning: Pleased to meet you (formal)

In German we simply remove the es from the beginning of the original phrase:

It doesn’t translate too well into English, but I’m sure you get the idea!

To say this informally we just change the Sie to dich as usual:

Still a bit of a mouthful? The good news is we can make this phrase even shorter!

This phrase doesn’t translate directly into English, but it’s so short and easy to remember, just think of it as ‘pleased to meet you’ the condensed version!

The best thing is that it can be used both formally and informally.

In fact, I remember blurting out freut mich when a German friend of mine unexpectedly introduced me to a neighbour of his. The introduction came as a bit of a surprise to me as I was just standing there listening to them talk amongst themselves.

Luckily I’d remembered the phrase freut mich, casually said it and the guy carried on as normal. I took this as meaning that I’d not said anything wrong or impolite. It’s a great phrase to keep on your survival phrases list!

So we’ve taken care of you starting the conversation. But what happens if someone gets in first and says to you ‘nice to meet you’ in German?

How do you respond? The good news is that if you’ve memorised one or more of the above phrases, you just need to add one extra little word in, to create the response, and that little word is auch (also / too / as well). Let me show you:

Nice and simple eh? To make it even easier we can also say:

Both of which mean ‘likewise’ or ‘the same to you’.

So there we have it, how to say ‘nice to meet you’ in German and how to respond. How about trying it out next time you meet a new language partner and make a note of how your partner responds.