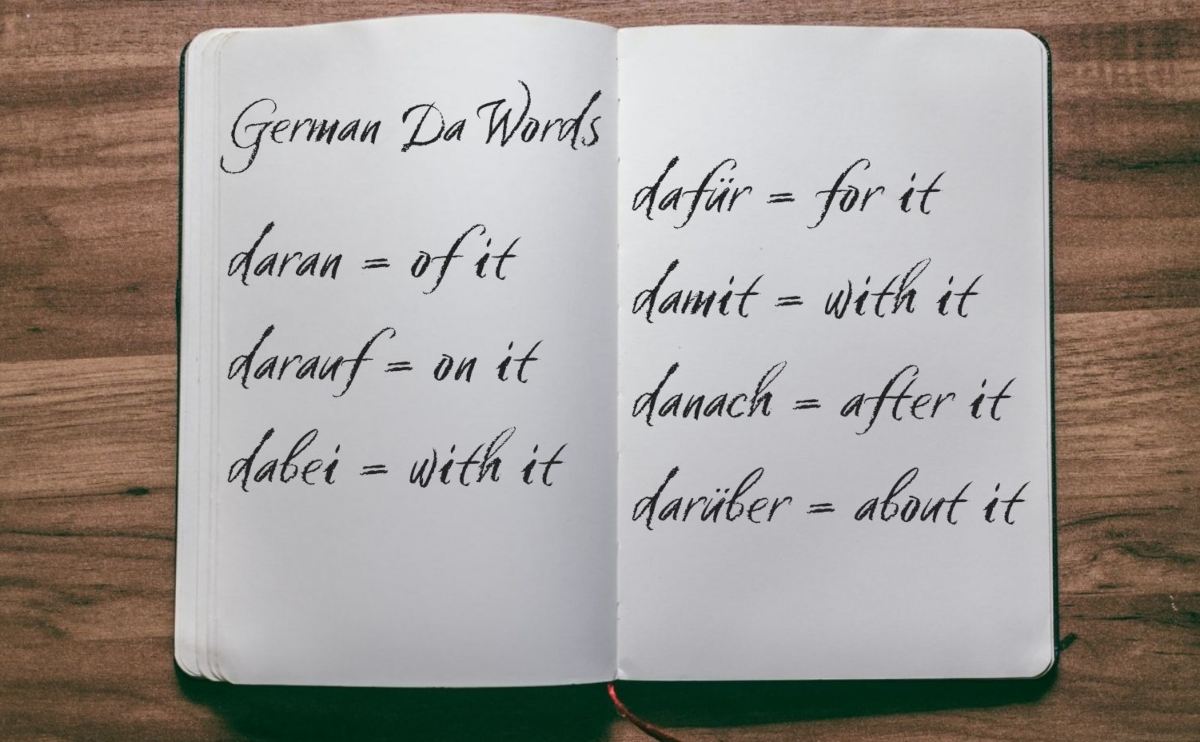 What Are German Da Words?

German ‘da words’ are an extremely useful group of words, but can take some getting used to. Da- is a prefix which appears in front of a number of prepositions. They are used to refer back to an object which was mentioned earlier in a sentence.

Da words are important because they will help improve your fluency by making sentences more streamlined and stopping you using more nouns than necessary in a sentence.

The most common German da words are:

With German da words it helps to think of da- as meaning ‘it’, ‘that’ or ‘them’.

When we use a German da word and pair it with a preposition, we end up with a word that means: the preposition + ‘it’.

For example bei (with) becomes dabei (with it). Für (for) becomes dafür (for it).

Here are some of the more common German da words that you’ll encounter:

How Are ‘Da Words’ Used?

One important thing to note when using German da words is that they are only used to refer to inanimate objects. If you are talking about a person or animal, you need to use the preposition + pronoun:

So whenever you refer back to any object in a sentence that isn’t a living thing, you’ll use a da word. Let take a look at an example:

In this example you can see that if we want to substitute the object (Auto) we first need to look at what preposition we’ve used. In this case mit. So we simply add da- in front of mit and there we have it: damit.

To use a da word in a conversation, you’ll see something like this:

The person asking the question has already mentioned the object (the car). Just like in English, the person answering doesn’t bother to repeat the noun. We already know that they are talking about a car, so a da word can be used instead of repeating the noun.

In English, we’re not as likely to say:

It just feels unnecessary to repeat the noun, we’re more likely to say:

And it’s the same in German.

Da words can also stand in for plurals. Let’s take a look at another example:

In this sentence the object is Fehler (mistakes). Since we don’t need to repeat this noun twice in the sentence, we just use dar- + the preposition (über).

Da words don’t change depending on whether it are talking about a singular or a plural object.

In order to really get the hang of these da words, let’s take a look at example sentences for each of them.

Now because German prepositions don’t translate that well into English, it’s best to familiarise yourself with their meanings first as some of the English translations I give won’t make a lot of sense.

In these examples the object that is being replaced with a da word is highlighted.