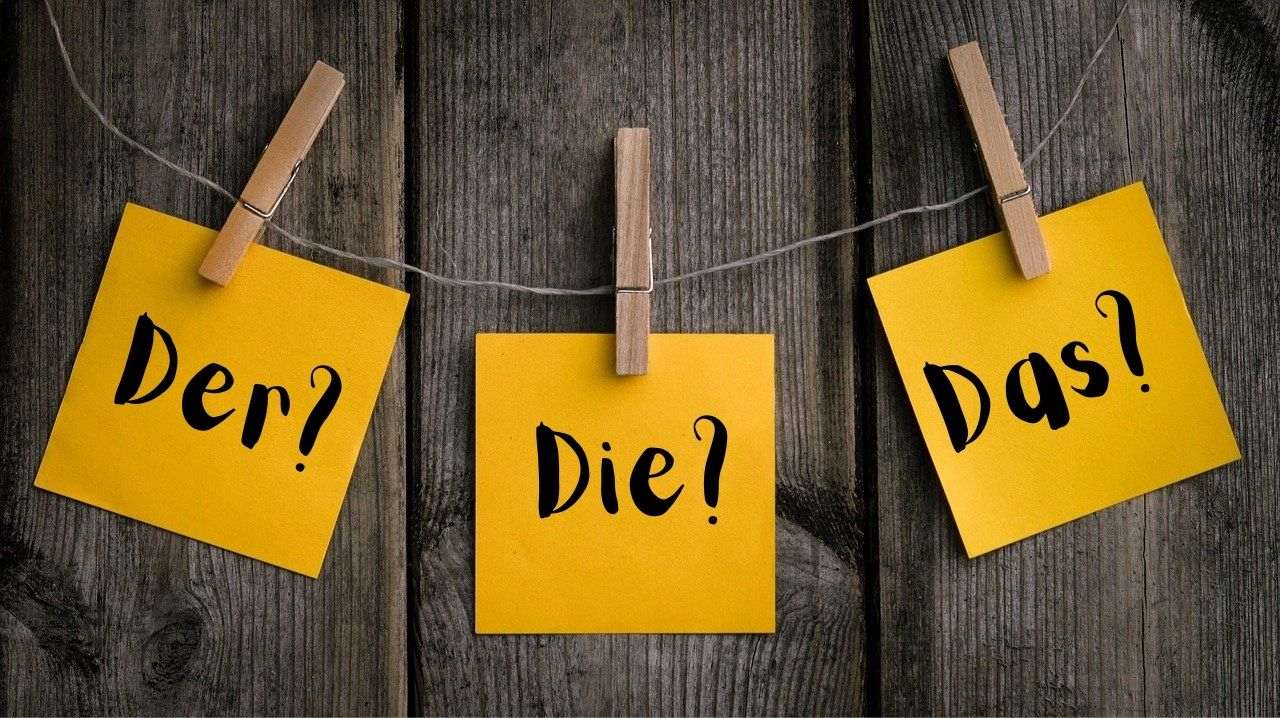 Have you just started learning German, and are wondering about the German articles?

What are they? Why are they important? How am I supposed to remember every article for every noun?

If learning German articles is leaving you feeling like you’re banging your head against a wall, this post will guide you through the basics, and teach you my favourite methods of memorising each article. Auf geht’s!

What are German Articles?

In English, we have an easy time with nouns. There are no genders so we only use the definite article ‘the’ or the indefinite article ‘a/an’. The closest we get to using gendered nouns in English is referring to ships as ‘she’.

What you discover very early on into your German learning journey is that all nouns have their own gender (masculine, feminine or neuter plus the plural). And while there are a few rules, the choice of gender sometimes appears to be completely random. Why is Bier neuter, yet Kaffee is masculine?

In this post I’m going to use a couple of terms, and I want to be totally clear from the start:

First of all let me introduce you to the basic articles. At this stage, just bear in mind that German uses 4 grammatical cases, which will alter the article depending on the context in the sentence, don’t worry about that for now, just concentrate on the gender of each noun. The gender of the noun never changes. In this post I’m going to use the basic, nominative case to give examples of noun genders.

Why Should You Learn the German Articles?

It may be tempting to ignore the articles when you first start learning German. However it’s really important that when you start learning, you memorise which gender each noun is assigned. Trust me on this one, I learned a load of nouns for everyday objects, then later on realised I had to go back and learn the gender. Make it easier for your future self and learn the noun and the gender together.

As frustrating as they are, the German articles are tightly woven into every aspect of the language. They dictate adjective endings and cases. You won’t be able to speak German correctly without having a good understanding of them and how they work.

Don’t be intimidated, for now when you learn a new noun, learn which gender it has and which article goes with it.

Now despite the maddening feeling that the genders have been randomly assigned to each noun, there are a few rules. There are many huge lists in books and on the internet showing these rules. However it would be nearly impossible to memorise each rule for each gender, as there are just so many. I will link to a rules page if you would like to take a look: Lingoda: German articles

Here are a few of the more helpful and more obvious rules that I have found useful myself:

People and occupations generally have the gender that is obvious. For example der Mann (masc.), die Frau (fem.), das Kind (neut. could refer to a boy or girl). Der Kellner (masc. male waiter), die Kellnerin (fem. female waitress). This isn’t always the case because we have das Mädchen (neut. girl). The reason for this rule-breaker is the -chen ending. More on that below.

It’s important to not get bogged down trying to remember these rules. Just be aware of them, as you progress you will start noticing patterns yourself. Your brain LOVES patterns.

Right, so we understand what the basic German articles are, and why it’s important to learn them from the start. What are the best methods for learning these pesky articles? The methods I’m about to describe I have used and still use myself and I find all of them effective in different ways.

First of all you need to decide what noun to learn, and what it’s gender is. Dict.cc is a great tool because it will give you the translation and the gender of the noun. This is my go-to app for learning new words. Now you’re ready to ease that noun and it’s gender into your brain, you have a few options.

I love this method! Post-it notes for language learning, it’s pretty straightforward. Get 3 different colour post-it notes for the 3 genders. It’s important to be consistent here.

A bit of gender stereotyping there but honestly it helped me to remember them. Now, get on dict.cc and start looking for translations to all your household objects. For example, I sit at my computer for a lot of the day. So I started with my laptop. Turns out it’s a masculine noun, so grab a blue post-it, write der Laptop on it and stick it to the laptop. Couldn’t be simpler. It’s surprisingly fun to wizz around your house sticking post-its all over the place.

I also find it useful to write the plural of the word in a different colour (in brackets) on the post-it.

The reason this works, is that you will make physical associations with the word, gender and the object itself. It’s important not to write translations (ok maybe laptop was a bad example!) but let the object itself show you what the word means. You add the colour of the post-it because it will make it easier to picture a blue post-it note on the laptop, rather than the word der, which is harder to remember.

You see these objects everyday, and you won’t need to make an effort to remember the gender. It will gradually sink into your head through gentle repetition of seeing the object, the post-it colour and the word. Whenever I think of the word for ‘wall’, Wand, I can picture a pink post-it stuck on the wall, even though the post-it has been gone for ages.

Sooner or later you’re going to run out of household objects to label. What’s next? What about learning the genders for other nouns, such as cathedral, shop, car, tree? You can’t exactly run around town with your post-its!

I read about this visualisation method in Gabriel Wyner’s book Fluent Forever. The idea behind it is to create a visual memory for each object. Masculine objects get exploded, feminine objects catch fire and neuter objects shatter like glass.

Make each memory as vivid as possible in your memory. Car in German is Auto, it’s a neuter noun (das Auto). So imagine a car covering in frost and ice and suddenly shattering into a million pieces.

The more graphic you make these memories, the better they will stick. I’ve tried this for quite a few nouns and it really works, though it takes time to create these images in your head.

You will find that you’ll learn a lot of articles purely though use and repetition. Think of phrases you are likely to use in tourist situations. A common one is ‘where is the toilet?’ Learn the chunk ‘wo ist die Toilette?‘ and use it when you’re out and about to help it stick. Congratulations, you’ve learned a useful tourist phrase, and also the gender for Toilette!

Genders are a little harder to define when we use the indefinite article (ein/eine). Remember the table from earlier?

If I were to say ‘das ist ein Hund’, would Hund be masculine or neuter?

As you learn more German grammar and learn about the 4 German cases (nominative, accusative, dative and genitive), you’ll find that learning phrases or sentences will help to remind you of the genders of some objects.

Ich hätte gern einen Tee, is something I say quite a lot when I’m in Germany. In this example the accusative case is used, so ein changes to einen. Remembering this phrase reminds me every time I use it, that Tee is a masculine noun.

The German cases are a complicated subject in themselves but for now, concentrate on learning the gender of each new noun you learn. Try out some of the methods described earlier. Let me know how you get on, I would love to hear was works best for you.