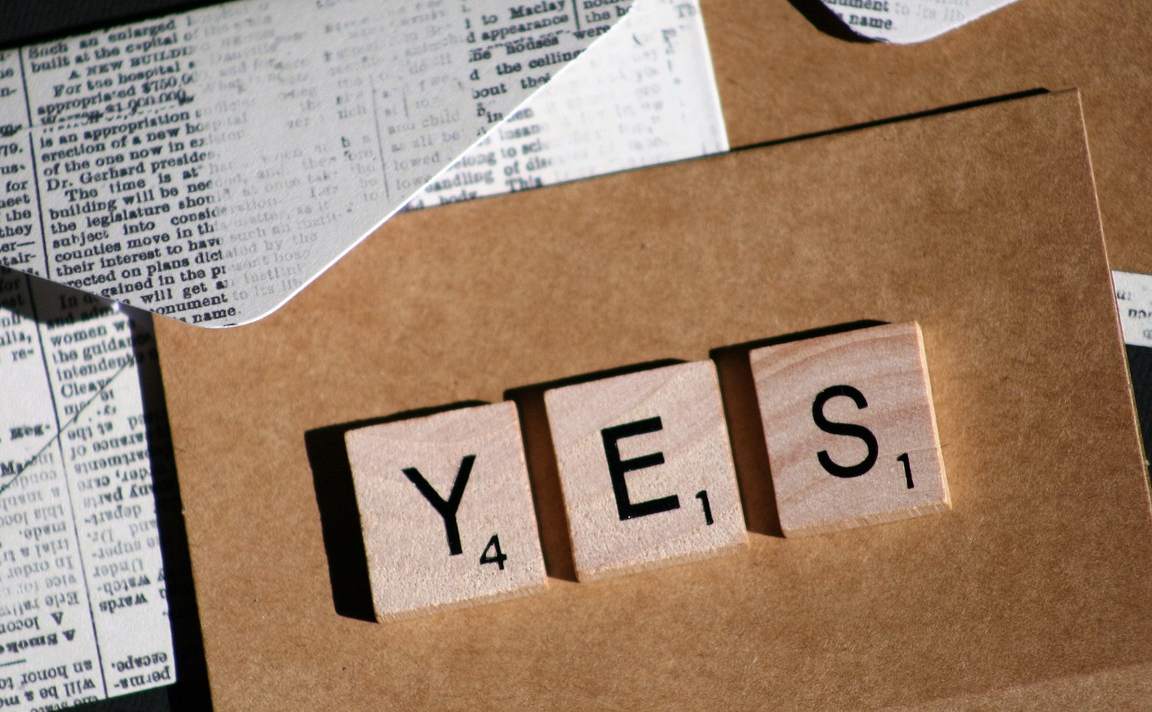 How do you say ‘yes’ in German? You may already know the standard German word for ‘yes’, ja. This simple two letter word is easy enough to remember, but there are also many other ways to say ‘yes’ and agree in German. Whatever the situation there’ll be a suitable ‘yes’ word or phrase.

In this post we will look at 21 of the most common ways to say ‘yes’ in German. So if you’re ready to agree to something auf Deutsch, let’s get started!

Chances are you already know this word, and if you don’t you’re probably relieved to see that the German word for ‘yes’ is very straightforward. We can use it in all situations, and just like in English, it can be paired with ‘thank you’ and ‘please’

If you want to add a bit more enthusiasm to the simple ja then jawohl is the word for you! Imagine that ja is an 8 on the positivity scale, then jawohl turns this up to 11!

I don’t think this one needs much explanation. Used in just the same way as we use it in English. Nice and easy!

Meaning: Of course / sure

This phrase doesn’t really translate well as na means ‘well’ and klar means ‘clear’ or ‘alright’, but it’s meaning is ‘of course’ or ‘sure’. It’s a useful phrase that you’ll hear often.

You may also hear another variation ja, klar which means ‘yes sure’, or even just klar (sure).

Alles klar is one of those German phrases that you’ll hear a lot, in lots of different situations. Often it is used in response to understanding something, but it can also be used at agree or say ‘ok’ or ‘alright’.

Another common way of saying ‘sure’, you can use it in the same way as you use ‘sure’ to agree in English.

Meaning: I agree with you (formal)

If you feel like sounding a bit more formal, you can make your response a little longer by saying ich stimme Ihnen zu. This is the formal version for use with people you don’t know, work colleagues etc.

If you’re speaking to someone informally, such as a friend or family member, use the informal version ich stimme dir zu.

The verb zustimmen (to agree) is conjugated and because this is a separable verb, the zu moves to the end.

Das stimmt, often shortened to just stimmt, is a phrase you’ll hear quite a lot. Think of it as a shortened version of the previous phrase ich stimme dir zu.

Meaning: That is true

If you need yet another way to say ‘that’s true’, German has another phrase to offer. Wahr translates as ‘true’.

Another way to say agree with something or say ‘yes’ in German without actually saying ‘yes’. A nice phrase if you want to express that not only are you saying ‘yes’, but you’re also really keen on the idea. You could also change it up a bit and say das klingt schön (that sounds nice / lovely).

Someone who is up for anything and likes trying new things might use warum nicht? as a response to a suggestion. This is quite a casual, laid back response that you’ll hear among friends.

Another easy phrase for English speakers. Can be used when someone asks you to help them with something, and you agree.

Translated directly as ‘in any case’, auf jeden Fall can be used on it’s own or as part of a sentence. It is strongly positive and can be used bit like how English speakers would exclaim ‘definitely!’ or ‘absolutely!’

Natürlich is a really common word, you’ll probably hear it all the time. Think of it as the English word ‘naturally’, which is sometimes used instead of ‘of course’.

Türlich is the abbreviated version of natürlich. A bit like English speakers saying ‘course’ instead of ‘of course’. You’ll definitely hear natürlich more often, but this shortened version is good to know.

Meaning: Yes, on the contrary

Doch is one of those very German words that we don’t really have a translation for in English. It is used to respond positively to a negative question. The nearest we have in English is ‘on the contrary’. If someone says something negative, use doch to contradict them. Here are a couple of examples:

If you’re agreeing to something but somewhat reluctantly you can say also gut. The person you say this to will understand that you are agreeing with them, but that you’ve taking some convincing to do so. It’s not necessarily a negative statement, but you’ll express that you’re not 100% happy about what you’ve agreed to.

Another one for those who don’t want to fully commit with a ‘yes’. Mal sehen is a great little phrase to buy you more time. Use it in the same way as we use ‘we’ll see’ in English.

One more word to remember for the unsure among us. Vielleicht translates as ‘maybe’, and you can go ahead and use it in the same as way as you would in English.

So now you know 21 different ways to agree and say ‘yes’ in German. Some occasions call for an enthusiastic jawhol! while others you maybe more reluctant to agree to something so opt for mal sehen.