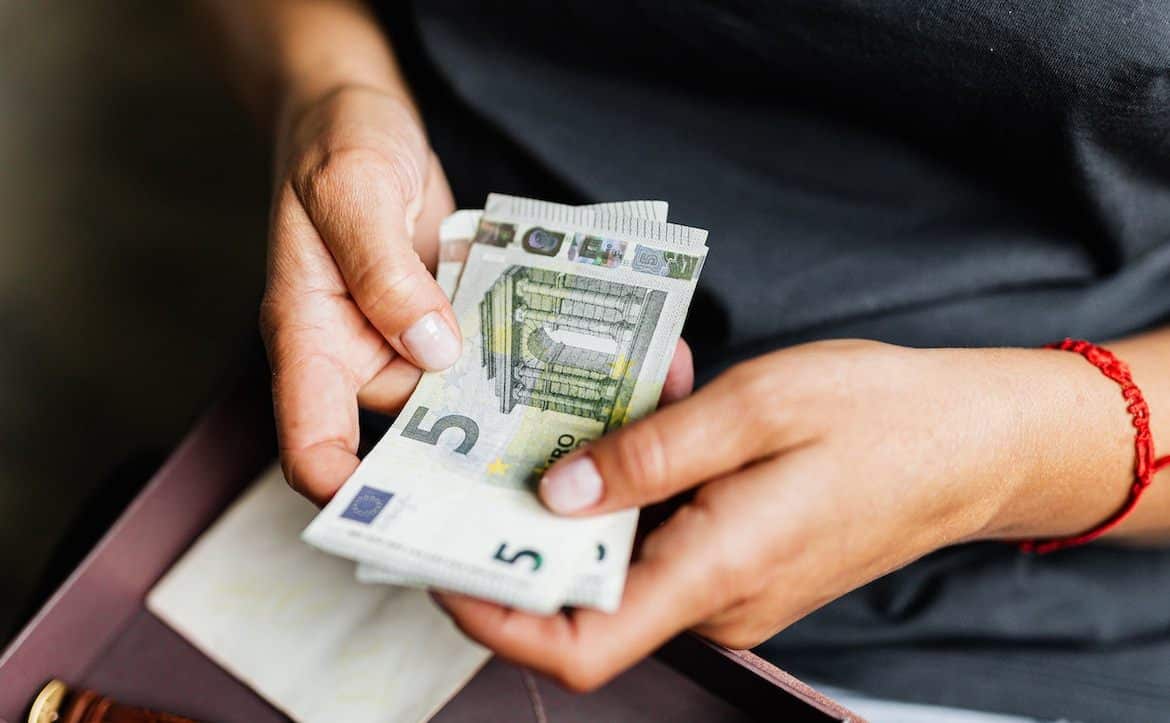 Money makes the world goes round, so they say. And money is something you’re going to encounter whenever you spend any time in any German speaking countries. Knowing how to talk about money in German is an essential skill, and is a topic with it own set of vocabulary and phrases.

When it comes to talking about money in German, there’s quite a bit to get through, so let’s start with some essential vocabulary that you need to know:

Depending on which German speaking country you visit, you’ll encounter different currencies. In this post you’ll learn mostly about the German currency, since this is where I have the most experience. However I also want to give you a heads up about Switzerland and Liechtenstein’s currency in this section.

In Germany, Austria and much of Europe, the currency is the Euro (€) with the ‘cent’ as the unit.

If you’re fortunate enough to travel to Europe regularly, you’ll get quite used to using the Euro. But be aware that not all countries in Europe use the Euro. This includes the German speaking countries Switzerland and Liechtenstein.

How to Talk About Money in German

The format used in spoken German for money follows the same pattern as in English:

If we are using both Euros and cents, the format is again similar to English. However unlike in English where we might leave out the word ‘dollar’ or ‘pound’, the word Euro is always used. Here’s an example:

Money in German: Paying with Cash

If you’re heading to Germany, one thing you’ll notice early on is how common it is to use cash. Despite the rise in popularity of paying by card, in Germany many people prefer to use cash instead of cards.

Regardless of whether you’re hitting the tourist spots, or going off the beaten path, you’ll regularly discover cafés and small businesses which only accept cash so it’s a good idea to always have some cash with you.

Money in German: Paying by Card

Many places in Germany do accept credit or debit cards as a form of payment particularly Mastercard or Visa. However it’s always wise to check beforehand. A great phrase to remember is:

Different banks may have various charges for paying abroad, so it’s important to check what charges you may be subject to before you travel.

My bank’s charges are horrendous, so I use a Revolut card instead of my normal bank card for travel. You preload your Revolut card (a Mastercard, so widely accepted) and get some of the best exchange rates.

There are no hidden charges and you can either use it in the same way as a debit card, or use it at an ATM to withdraw local currency easily and for free, at the best exchange rates available for that day.

I wouldn’t be without mine now as it means I don’t have to bring much cash with me, and can instead just withdraw cash as I need it. Click here to get your Revolut card for free.

A note on the EC-Karte

The EC-Karte, also known as the Girocard is a common debit card in Germany. This is a debit card which you can get if you have German bank account, so if you’re just heading to Germany for travel this won’t be an option for you.

The reason I mention it is because you’ll likely encounter businesses which accept the EC-Karte or cash, but not Visa or Mastercard. In fact, this exact thing happened to me at the end of my last trip to Germany, when I’d run out of cash:

At the time I hadn’t actually heard of the EC-Karte, so I said alles gut, danke (alright, thank you) and left to find another café. It was only after a bit of googling that I learned about the EC-Karte, so I thought it was important to let you know about it too.

Here are a few useful phrases related to money which you may hear or say:

Money talks! And now you know exactly how to talk about money in German.